Praying for My Life eBook

When life experiences became overwhelming and her faith was severely tested, popular author and Guideposts magazine contributing editor Marion Bond West found herself praying for her life—praying a desperate prayer for confidence in God's promise of faithfulness. In her spiritual memoir, Praying for My Life, the author shares her story and the prayer that changed her life.
Skip to the end of the images gallery 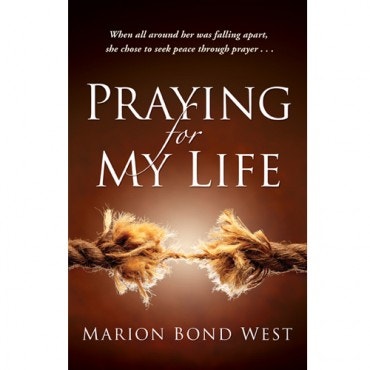 About Praying for my Life
When life experiences became overwhelming and her faith was severely tested, popular author and Guideposts magazine contributing editor Marion Bond West found herself praying for her life—praying a desperate prayer for confidence in God's promise of faithfulness. In her spiritual memoir, Praying for My Life, the author shares her story and the prayer that changed her life.

West is no stranger to adversity, and in these pages she relates some of the challenging situations she has faced. She struggled as a mother of four, particularly after the birth of her youngest children—twin sons. She watched her beloved husband Jerry succumb to cancer and faced raising her children as a single mother. And later, she watched her two now-adult sons struggle with addiction, mental illness, and simultaneous hospitalizations with life-threatening injuries.

Through it all, even when things seemed bleak,Marion prayed the prayer of Habakkuk: "Though the fig tree should not blossom, And there be no fruit on the vines...Yet I will exult in the Lord." She says: "For thirty years, I have loved and identified with this Scripture. It's from a tiny book—pastors rarely preach from it. But I marvel at the prophet's astonishing faith—his stubborn, determined faith that was never altered. Never."

Written with honesty, uncompromising faith, and wry wisdom, this book is a treasure readers can turn to again and again to witness the transforming power of prayer.

The story begins in 2003 when West's 35-year-old son, Jeremy, crashes his car and is rushed to the ER A day later, his twin brother, Jon, is hospitalized with a potentially fatal case of flesh-eating bacteria. Jeremy, it turns out, is bipolar and often refuses to take his meds; this is his fourth accident in just a few weeks. Jon is addicted to drugs and has been kicked out of rehab. As she sits by her sons' hospital beds, West flashes back to their hyperactive childhood, their father's death at 47 of a malignant brain tumor, their grandfather's breakdown and her regrets over how she handled her sons' turbulent adolescence. It sounds like material for a country-western song, but West, a long time contributing editor to Guideposts magazine, turns family crises into a heartwarming and even (sometimes) funny collection of stories about trusting God no matter what happens. For her, God is a personal friend who speaks up whenever she needs encouragement: "I am going to use all of this. Nothing will be wasted." Lightening the mood with folksy tales about her late mother, eccentric neighbors and middle-aged romance, West dishes up inspiration with a warmhearted honesty that will appeal to a wide range of Christian women.

Marion Bond West has been writing for more than thirty years and is the author of six books. She has written for Guideposts magazine and Daily Guideposts since the 1970s and is known and loved by millions of Guideposts readers. She was married for twenty-five years to Jerry West, who died of cancer in 1983. Together they had two daughters and two sons. She found her second love in Gene Acuff, and they married almost twenty years ago. They live in Watkinsville,Georgia, where they spend much of their time on the front porch swing.