Welcome to Hope Beach, a place of intoxicating beauty... where trouble hits with the force of a hurricane.

Buy One, Get One FREE Offer! Purchase Tidewater Inn, and get Rosemary Cottage for FREE! 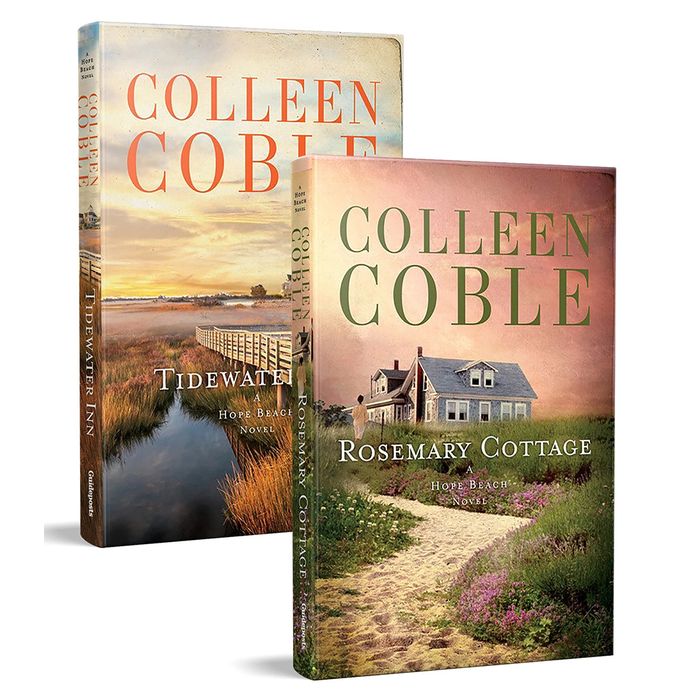 About the Two Book Set


Tidewater Inn
Inheriting a beautiful old hotel on the Outer Banks could be a dream come true for Libby. The inn cries out for her restorer’s talent and love of history. She’s delighted to learn of the family she never knew she had. And the handsome Coast Guard lieu-tenant she’s met there on the island could definitely be the man of her dreams.


But Libby soon realizes that the only way she can afford the up-keep on the inn is to sell it to developers who are stalking the island. The father who willed her the inn has died before she could meet him, and her newfound brother and sister are con-vinced she’s there to steal their birthright. Worst of all, her best friend and business partner has been kidnapped before her eyes, and Libby’s under suspicion for the crime.


Libby’s dream come true is becoming a nightmare. Her only option is to find her friend and prove her innocence, or lose everything on the shores of Hope Island.

Rosemary Cottage
The charming Rosemary Cottage on the beach offers Amy Lange respite she needs to mourn her brother, Ben. She’s even thinking of moving her midwife practice to the Outer Banks community. It’s always been a refuge for her and her family. She also wants to investigate Ben’s disap-pearance at sea. Everyone blames a surfing accident, but Amy has reason to wonder.


Coast Guard officer Curtis Ireland has lost a sibling too. His sister, Gina, was killed in a boating accident, leaving him to raise her infant daughter. If anyone knew who little Raine’s father was, Curtis could lose his beloved niece. Yet he can’t help being drawn to Hope Beach’s new midwife, Amy. He even agrees to help her investigate.


Can two grieving people with secrets find healing on beautiful Hope Island? Or will their quest for truth set them at odds with each other and with those who will go to any length to keep hidden things hidden?