Bestselling Christian author Colleen Coble takes us on another exciting journey with these two romantic suspense novels. From the shores of Folly Shoals, Maine go on a thrill ride with the Sunset Cove series that will leave you guessing up until the very end.

Buy One, Get One FREE Offer! Purchase The Inn at Oceans Edge, and get Mermaid Moon It’s Still  for FREE! 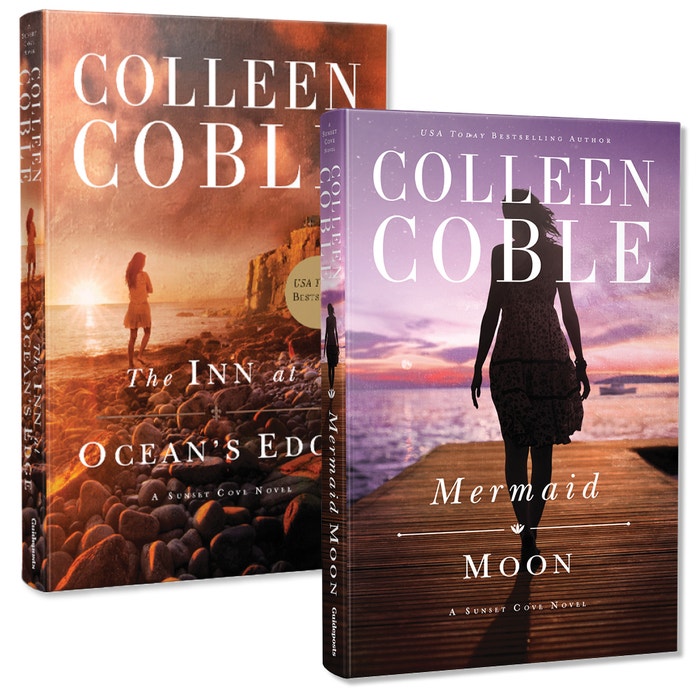 In 1989, Claire Dellamare disappeared from her own fourth birthday party at the Hotel Tourmaline on the island of Folly Shoals, Maine. She showed up a year later at the same hotel, with a note pinned to her dress but no explanation. Nobody knows where Claire spent that year—and until now, Claire didn’t even know she had ever been missing.

But when Claire returns to the Hotel Tourmaline for a business meeting with her CEO father, disturbing memories begin to surface . . . despite her parents’ best efforts to keep them forgotten.

Luke Rocco lost his mother under equally mysterious circumstances—at the same time Claire disappeared. After a chance encounter reveals the unlikely link between them, Claire and Luke set out together to uncover the truth about what happened that fateful year.

With flashbacks swimming just beneath her consciousness and a murderer threatening her safety, Claire’s very life depends on unscrambling her past . . . even if her family refuses to acknowledge it. Someone—maybe everyone—is hiding something from Claire Dellamare, and it will cost her everything to drag the truth out
into the light.

Shame and confusion have kept Mallory Davis from her home for the last fifteen years, but when her dad mysteriously dies on his mail boat route, she doesn’t have any choice but to go back to Mermaid Point.

Mallory believes her father was murdered and childhood sweetheart Kevin O’Connor, game warden in Downeast Maine, confirms her suspicions. But Kevin is wary of helping Mallory in her search. She broke his heart and left—without a word—years ago.

When Mallory begins receiving threats on her own life—and her beloved teenage daughter, Haylie—their search intensifies. There’s a tangled web within the supposed murder, and it involves much more than what meets the eye.

As answers begin to fall into place, Mallory realizes her search is about more than finding her father’s killer—it is also about finding herself again. . . . and possibly about healing what was broken so long ago with Kevin. She just has to stay alive long enough to put all the pieces together.