All That Remains - Secrets of Wayfarers Inn – Book 3

When Janice Eastman wakes from a nap to find her five-year-old grandson has gone missing, she must confront crippling fears as her search takes her into the darkest recesses of Wayfarers Inn. There, she makes a startling discovery: skeletal human remains lie alongside an antique photo of a woman holding a child. The discovery of the bones pulls her, Tess, and LuAnn into a mystery that they must quickly solve before archaeological and general curiosity from the public and media threatens to further delay the inn’s opening. Will this be the end of their dream for Wayfarers Inn?
Skip to the end of the images gallery 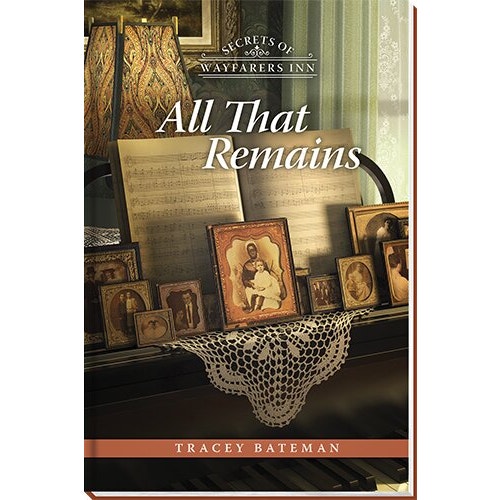 About Secrets of Wayfarers Inn

On the banks of the Ohio River, in the historic town of Marietta, Ohio, a trio of good friends stumbles across an empty historic waterfront stone building while house hunting. Next to a Realtor’s "For Sale" sign, an aging bronze plaque on the doorpost marks the building as once being a pre-Civil-War stop on the Underground Railroad. The four-story building, originally built as a hotel, was most recently used as a warehouse for goods arriving via river barges, but it has sat empty for the past decade. On a whim, LuAnn Sherrill, Tess Wallace, and Janice Eastman start to think of what a beautiful bed-and-breakfast this could be. When all is said and done, these three friends are the proud co-owners of the neglected but elegant structure, which they plan to renovate and open as a café and B&B known as Wayfarers Inn. While remodeling, they come across hidden passages, filled with secrets and surprises of all sorts, which set them on a course to solving mysteries.

As the trio of friends are drawn further and further into the mysteries of the inn and the town of Marietta, with its intriguing antebellum heritage, each one finds her own personal faith enriched—in both God and humankind.


Treat yourself to Guideposts’ newest Christian Mystery series, Secrets of Wayfarers Inn, where pre-Civil War mysteries abound in these cozy fiction books about faith and friendship.

When retired school teachers LuAnn Sherrill, Tessa Wallace, and Janice Eastman, decide to buy an inn built in 1851 and turn it into a café and bed and breakfast, someone is not happy. Strange things begin to happen in the building—handprints on a dusty mirror, a missing wallet—and who owns the gold earring? Realtor Bradley Grimes is helping them unravel the mystery when he finds one of his own. In a ledger from the 1800s he finds the name of his great-great-grandfather, Howard Bickerton, the man he’d always thought of as a hero in the Underground Railroad. But was he?

Prudence Willard, a farmer’s wife and conductor on the Underground Railroad, faces danger on a regular basis, but nothing is quite as frightening as witnessing what happened to Howard Bickerton—and keeping the knowledge to herself. Should she report Bickerton’s death and the man who assumed his identity, or remain quiet for the sake of the Cause?

FOR PRINT SERIES FORMAT ONLY:  When you click the Place Order button you are authorizing Guideposts to charge your credit card for the intro shipment and all future shipments.  You should receive your first shipment within 3-4 weeks of ordering.  Then, unless you cancel, about every 4 to 6 weeks you will automatically receive a new book for only $15.95, plus $3.99 shipping, and sales tax where applicable. If the credit card is declined for any shipment, Guideposts will mail an invoice when the book is shipped.  If you are not completely satisfied, you may return any shipment within 30 days and owe nothing. We will refund (or credit your credit card) the value of the merchandise you return. There is no minimum number of books to purchase and you may cancel at any time by calling customer service at 1-800-932-2145, Monday - Friday, 8 am to 6 pm EST or by visiting https://ShopGuideposts.org and logging into your account.