In this warmhearted Guideposts original fiction series, widowed Miriam Maxwell returns to Chesapeake Bay to take over her late sister's antique store and reconnects with old friend Samuel Bentley. When Samuel buys a desk that belonged to Miriam's family for generations, a discovery hidden in a drawer sends the pair off on delightful adventures in mystery and history.
Skip to the end of the images gallery 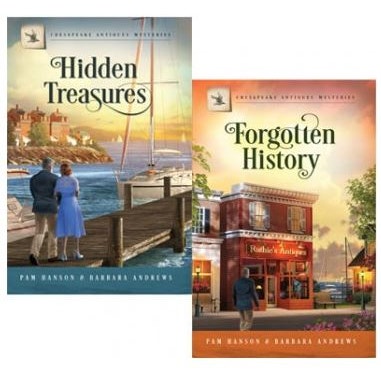 In this warmhearted Guideposts original two-book fiction set, widowed Miriam Maxwell returns to Chesapeake Bay to take over her late sister's antique store and reconnects with old friend Samuel Bentley. When Samuel buys a desk that belonged to Miriam's family for generations, a discovery hidden in a drawer sends the pair off on delightful adventures in mystery and history.

Forgotten History
When Miriam Maxwell returns to her Chesapeake-area hometown to take over her late sister Ruthie's antiques store, she reconnects with Bess Watkins, an old friend who, along with her granddaughter Phoebe, begins helping Miriam with the shop. As Miriam struggles to organize her sister's jumbled store, her very first customer turns out to be Samuel Bentley, whom she dated in high school. He buys an heirloom desk and later discovers, hidden in the drawer, a cryptic map with an uncomfortable implication: Miriam's ancestor was a deserter from the Confederate army! Guided by tantalizing clues--antique photographs, an old Bible, and visits to a military cemetery--Miriam and Samuel piece together the slim evidence. Will the information they uncover exonerate Miriam's ancestor? In the course of their research, they begin to realize that their feelings for each other run deeper than their shared love of history.

Hidden Treasures
During a big sale at the local jewelry store, Samuel Bentley picks out a vintage sapphire ring that he knows Miriam Maxwell will adore. But she is shocked to recognize it as an heirloom piece of her mother's. When the gem falls out--and is found to be phony--they find the Art Deco setting is etched with a name: Theo. While Samuel tries to track down the jeweler who has abruptly left town, they learn that other customers have purchased jewelry set with fake stones. The mystery deepens when a man shows up, seeking to claim an inheritance of costume jewelry, which Miriam can't find. As she readies her late sister Ruthie's foursquare house for a Labor Day Tour of Homes, she and Samuel grow more curious. Why would Ruthie have sold such a precious family treasure? Who is Theo? Where is the missing costume jewelry? And did Miriam really know her sister at all? The investigation soon reveals that Ruthie was keeping a secret, but it is much bigger than Miriam could have imagined.