Lazy summer days give way to harsh reality when a storm damages the roof of Margaret’s new gallery. She is forced to close the fledgling business just as tourist season is starting to take off. With the local handyman out of commission, Margaret struggles to get the roof repaired, and with her income cut off, she is quickly running out of money. Will the gallery’s doors have to stay closed for good? Will she be forced to let go of her dream so soon? As the days wear on, it becomes clear that it will take a miracle to save the struggling gallery.

Shelley is trying out ideas for her own baking business, but her husband Dan has been working long, strange hours. What is he up to? Is he lying to her about what he’s really doing? Diane works on finishing the first draft of her cozy mystery, and tries to convince Detective Fred Little to let them inside the lighthouse to see if they can find any clues to the mysterious flashes they’ve seen from the structure. Then, Beverly discovers a set of initials carved into the base of the Orlean Point Light, along with the cryptic message “I’m sorry.” What could it mean? Finally, the women get permission to go inside the lighthouse and discover that the secret of the puzzling beacons are more mysterious than they ever imagined 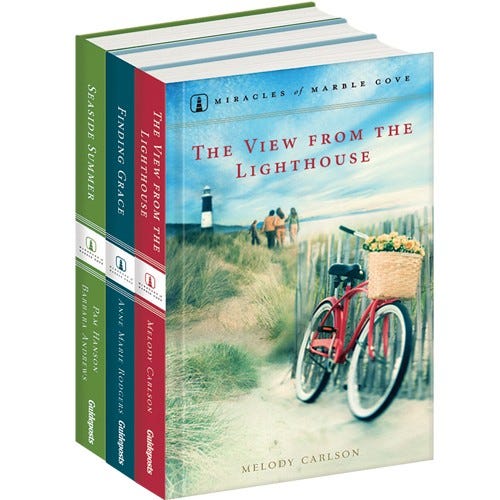 A Guideposts series that is about four very different friends who live in the seaside village called Marble Cove. Never be without a book! Subscribe to the series and be delivered a book right to your door.

A great summer story! I liked the infusion of a continuing character in a new mystery. There's a hint of some info for the main mystery. The reader learns more about the main characters and new ones. A great series, like an on-going serial.

Write Your Own Review

Only registered users can write reviews. Please, log in or register

Check items to add to the cart or select all